“ERLAND HAGEGÅRD  IS ONE OF THE BEST TENORS IN THE WORLD”

OPERA, CONCERT AND ALL-ROUND SINGER – AND A MAN OF SURPRISE

THE STORY OF ERLAND HAGEGÅRD

The first surprise came in 1965 when Rikskonserter [Concerts Sweden] chose Erland Hagegård as their first concert debutante. The reviews were raving. Per-Anders Hellquist (Svenska Dagbladet) wrote: “It is somehow hard to believe that a young singer in a small country like ours can step forward out of nowhere with a ‘profile’ that rivals world class singers.” The heading of the review was “A sensational debut”. Other review headings were: “An artist steps forward” (Leif Aare, Stockholmstidningen, “Sweden has got its own Fischer-Dieskau” (Folke Håhnel, Dagens Nyheter).

Rikskonserter (formerly the Swedish National Concert Pilot Project) had an ideal concept for its debutante programme. The young artists were given splendid opportunities to gain stage experience gradually and learn to control their nerves by touring the country before the debut concert performance in Stockholm.

In the same year as his debut, Erland Hagegård graduated as a music teacher from the Ingesund School of Music in Arvika with a major in singing and minors in trumpet, cello and piano.

He continued studying solo singing and voice pedagogy at the Royal College of Music in Stockholm for three years, where he studied under Arne Sunnegårdh and Hans Wihlborg, among others. While studying in Stockholm, Erland gave many concerts, made recordings and appeared on TV shows.

In this period he received the Christina Nilsson scholarship three times. He is also the recipient of culture awards from the Värmland County Council, the Fröding Society and the Nya Wermlandstidningen.

Erland was for a long time disappointed at not receiving the title of Court Singer until he learnt that not even Christina Nilsson was awarded this prestigious title. The reason for this omission was that this title is primarily bestowed on singers permanently engaged at the Stockholm Opera. Erland was never able to accept all the offers of permanent engagement at the Opera given by Göran Gentele and Folke Abenius because of his resident engagements at opera houses in Europe. However, he had the great pleasure and opportunities to perform as a guest artist many times at Stockholm Opera.

Erland Hagegård was offered his first permanent engagement at the Volksopera in Vienna in 1968 and this was the start of a string of leading roles. The debut roles were in three operas-minutes: “L’enlevement d’Europe”, L’abandon d’Ariadne” and “La deliverance de Thesee” by Darius Milhaud.

The career cycle was now in full spin in terms of concert and opera performances in Vienna, but he also managed to squeeze in studies at the Hochschule für Musik und darstellende Kunst (including, for instance, Liederinterpretation with Erik Werba). Earlier he had studied interpretation with Gerald Moore in Stockholm and Paul Schilhavsky at a Summer Academy in Salzburg, 1963, where he, without knowing it, won ?????????

In 1971 it was time for a change of scenery and Erland got permanent engagement at the Städtische Buhnen in Frankfurt am Main and then moved to Staatsoper in Hamburg in 1974. The two contracts were signed during his time in Vienna and in these years Erland’s reputation as a world class baritone was consolidated.

The second surprise came in 1977 when Erland changed from baritone to tenor. This was a big step, which meant new big roles. Erland had consulted the singing teacher Georges Athana in Hamburg on his voice type. First he sang a baritone aria and then tenor aria, whereupon Athana exclaimed: “If you are NOT a tenor, I’ll eat three brooms!”

As a result, Erland made the decision to cancel his contract with the Opera House in Hamburg so he could focus on the arduous task of changing ‘Fach’. With the support of Athana as well as Hjördis Schymberg and Hans Gertz, Stockholm, he worked intensively to prepare for the BIG change. The exercises were mostly scales to make the voice light and free, although it is equally important that the lower register is produced with ease–without strain. Only a “schlank format” will allow a singer to reach the tessitura.

The change was not a spur-of-the-moment decision. As a baritone Erland had had thoughts about trying his wings as a tenor. When he sang Escamillio, for instance, a critic wrote: “Erland Hagegård has a beautiful voice that sometimes sounded too ‘tenoral’ for the part of Esamillio.” On another occasion in Frankfurt singing a concert of Mahler’s “Kindertotenlieder”, Erland felt as if he had only produced “hot air” in the lower register. In addition, there was an occasion in Austria when he sang Don Giovanni that a critic wrote: “The brilliance was in the singing. Erland Hagegård is a Baritone and produced a light and easy top register–not unlike a Tenor. His voice could easily fit into the ‘Heldentenorfach’.

These experiences and comments from colleagues combined with his own feeling that the top register was most comfortable for his voice are the reasons for his decision to change voice type.

New opportunities knocked for the now freelancing tenor, as he had not been able to accept so many of the offers of interesting concert engagements before because of the permanent contracts. The first role in the new ‘Fach’ was as Xerxes, the King of Persia, in the opera Xerxes by Händel at the Drottningholm’s Slottsteater in Stockholm, 1979.

In 1980 Erland sang the tenor part of Rodolfo in La Bohéme where he had earlier performed the Marcello baritone part, and in 1982 he repeated this shift by singing the tenor part of Lensky in Eugene Onegin where he had done the baritone title role in the 70s.  This was sensational because few singers had succeeded in doing this before and the papers paid attention. That Enrico Caruso had done the same was forgotten. Also Placido Domingo started his career as a promising baritone.

The third surprise occurred in November 1985 after about 45 opera roles, 5 operettas, 30 recordings and innumerable concert performances all over the world, when Erland Hagegård suddenly decided to end his brilliant career and withdraw from the international opera stage. Family, home, a “settled place on earth” seemed more important than the erratic artist’s life of constant travel.

As Erland strives for perfection in singing as in all things, he not only puts pressure on himself; he also feels the pressure even more.

Erland strongly believes that you should definitely stop singing BEFORE the voice starts deteriorating. Many would disagree but few would have the strength to make the move when the time comes. Another motto to live by is to dare jump into the cold water and burn the ships if you want to change your life.

A whole opera world was mourning. Everyone was wondering how it is possible to stop singing after twenty successful years as a professional singer.

But the decision was made after thoughtful deliberations. At this moment Erland was totally convinced that he would never sing a single note again. This conviction was to change later when he, after a long and hard time, suddenly found a couple of great “supporters” by his side ready to help–a blessing for every artist.

When he had already left his career, He received a letter from Birgit Nilsson, saying: “The world has missed out on a Wagnerian Tenor”.

“THERE ARE PLENTY OF GOOD AND NICE THINGS…” (Gustaf Fröding)

The fourth surprise happened after Erland had stopped singing. In 1986 he started his own production and record company, EHC Production AB, which, among other things, arranged so called Back Yard Concerts. The first years’ concerts were performed in a courtyard in central Karlstad. In the years to follow, the event took place at Mariebergsskogen, for instance, where Sissel Kyrkjebö, Sofia Källgren, Putte Wickman and Cornelis Vreeswijk were among the perfomers, in short, top artists from the Nordic world of music, especially in the classical genres but also in the fields of folk music and jazz.

In the summer of 1987 Erland sang with the Vikings in Eda Folkets Park, which turned out to be the fifth surprise. The big audience responded enthusiastically and Erland wrote more autographs than ever before. The idea of a ‘lighter’ repertoire presented itself, and was realized in the form of an album with hit songs, titled Songs of the Heart was put together and released into record stores in1990 and was a big success in Sweden. The song “Beautiful Thoughts and Words” from this album was on the Swedish top ten list and is often requested and played on the radio. The next album was Everything is a Replay. So the international singer, Erland Hagegård, has also become an all-round singer.

Erland started his career as a concert singer, probably his strongest genre, and returned to the concert stage singing both profane and sacred music because “it’s so damned enjoyable”. Nevertheless, Erland has stood by his decision “never to sing opera again” since 1986.

He has also given master classes–Academy for Young Singers–in Karlstad and Stockholm.

Another very successful event in recent years has been the recurring classical sing-along by the River Klarälven and the sing-alon at Sandgrundsudden lead by Erland.

Erland keeps up these activities in the service of ‘Frau Musika’, “as if nothing has happened”… Maybe a bit more sybaritic than before, and not only as a cultural producer but also as a cultural performer with some solo performances and in the duo WE2 with Monique Brynnel.

At the Royal Academy of Music in Stockholm, Erland’s singing teacher was the mother of the pop singer Magnus Uggla, namely Madeleine Uggla.

Erland has been engaged and performed on the same stage–Volksoper in Vienna–as the Queen of Disco, Donna Summer. She was then a dancer and choir singer. William Warfield played Jou in Show Boat, when Erland Ravenal and Julia Migenes Magnolia… 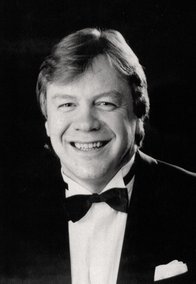